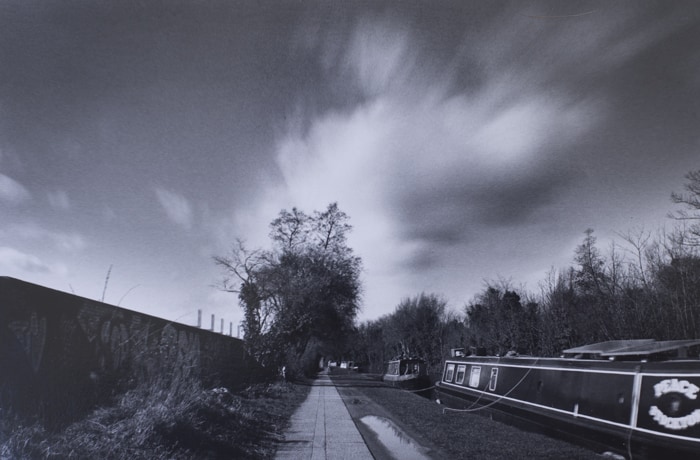 Also in the Luminance exhibition I showed a series of black and white images taken with my good old Nikon F65 and a variety of films with long exposures. All the images were taken in North West London in January and February this year (yes, also the blooming tree!). I then developed the films and printed the images in the fantastic darkroom of Kensington and Chelsea College.

As well as a variety of films (although ended up only using images from two films)  I also used a variety of Ilford fibre papers for the prints, so some have a warmer  or colder tone than others and some are glossy. The images on this page as photographs of the actual prints rather then scanned versions as a lot of work had gone into burning, dodging and getting everything just right. I even gave hand retouching little blemishes a go. But of course, photographing them in less than ideal conditions takes a lot away from the images. Best to see them in real.

Taking the images in the first place was really challenging. And not only because of the weather. I wanted to expose the images for as long as possible to catch the movement of the clouds and leaves and to render water still. So first of all, I needed a dry day with exactly the right amount of clouds. Then, once I had found my spot, I had to measure the exposure (the films were all ISO 100, aperture 16-22), then screw on the ND1000 filter which basically lets in so little light that you have to increase the exposure by ten stops – in this case it gave me +10 stops exposure time. I calculate the new exposure time which was usually around 30-60s. I then had to check the film’s description to check the estimated reciprocity law failure and increase the exposure time accordingly. If you are not familiar with this term, to put it in a nutshell: Film needs a certain amount of light to chemically react and form an image. In very low light conditions it tends to ‘forget’ that there was a little light already and ends up needing much more of this very weak light that you would calculate. Depending on the film this reciprocity law failure increased my exposure time dramatically. Ilford Delta 100 gave me exposure times of 4-5min whereas Kodak Tmax 100 and Agfapan APX 100 needed much less adjustment and led to exposure times of 1-2min. In this case I found the longer exposure time very useful and ended up using mainly Ilford Delta 100. I also used a polariser filter to  increase the contrast between the sky and the clouds and at one point also used a red filter. However, the filters changed exposure time again by so much, that a  lot of my negatives ended up completely underexposed. It was a steep learning curve!